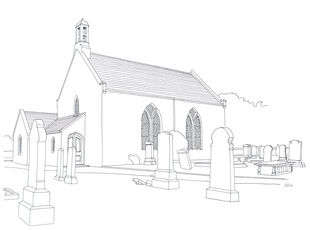 Stracathro Church is built within the site of a Roman fort (c80-230AD). In 1296 King John Balliol submitted to Edward I in the graveyard before abdicating the throne of Scotland. The current building is rectangular in red sandstone with a bellcote on the west gable. The bell was “made for the Kirk of Satrcathro on 1st May 1793 by T Mears of London”. The church was opened in 1799 and extended in 1878. Internal alterations were carried out in 1970 with added furniture from St Andrew’s Church of Scotland in Fairlie, Ayrshire. A slab by the entry gate commenorates three members of the Guthrie family, including James, the Martyr. The psalm/hymn tune Stracathro, 1848, was composed to reflect this benign area.

9.30amo on the second Sunday of each month

Open by arrangement with Brechin Cathedral