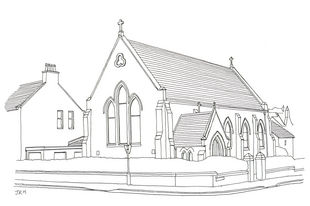 When St Margaret’s was opened in 1911, it was described as ‘the prettiest church in Lerwick’. The architect was James Baikie of Kirkwall. one of the outstanding features is the high altar, carved out of Belgian oak and consisting of six saints in elaborate niches either side of the central crucifix and tabernacle. The church is dominated by three large stained glass windows by C R Sinclair, 1986, depicting traditional and contemporary life in Shetland as well as some of the wildlife. St Margaret’s is the most northern Roman Catholic Parish in the British Isles. Well worth a visit!

Twice a month (every 2nd Sunday and 4th Sunday) there is a Mass in Voe (Church of Scotland Kirk, Voe) at 9am.