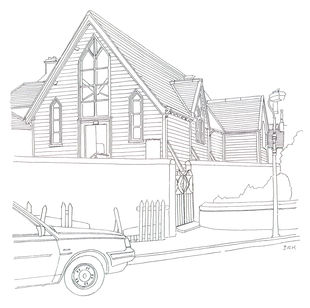 Built in 1865 for the Episcopal community and used by them until their present church was built in 1872. Thereafter this building became the Mechanics’ Hall until 1895 when it was reconsecrated for the Roman Catholic communion. Dark wood-clad walls and steep slated roof. Restored 1990.