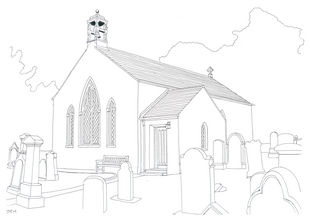 Built in 1818 on the site of a 16th-century building, St Anne’s is a small country church with a bright interior. The designer was probably John Stewart, although the church has been much altered since. Dates on the bell (which is still in use) and belfry suggest that they came from the earlier church. The chancel has carved screens which were originally in Dunkeld Cathedral. The organ was moved from Dunkeld Cathedral in 1909. One of the Memorials is to John Robb, a minister of the parish who perished in the shipwreck in which Grace Darling became a national heroine.