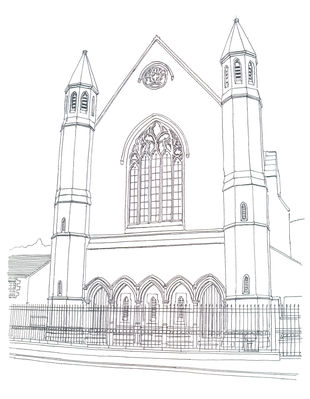 The church was built by Robert and Charlotte Hope-Scott of Abbotsford. It is a Gothic Revival building of 1856-58 designed by William Wardell, a pupil of Pugin, and extended 1866-72 by Goldie & Childe. Many interesting features including the late 19th century decorative scheme, high altar by Earp of London, stone pulpit and font and side altars to Irish and Jesuit saints. The church has had links with the Polish Community since 1942 when gifted the Madonna & Child window in the Sanctuary.