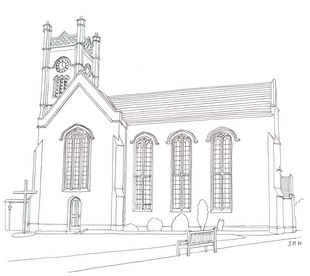 Kinross Parish Church was designed by George Angus in 1832 in a Tudor Gothic style on a large scale, with a tall west tower. It occupies the highest point of the burgh. George Angus used almost identical designs in Fife at Kingskettle and Kincardine. The only significant external change has been the addition of a suite of rooms in 1902 at the west end, with a large Gothic window. The apparently-cruciform external appearance of the church cleverly disguises a square, Georgian, preaching interior, flooded with light. Interior modernised 2005 (architect: David Murdoch, Methven) but retaining the overall form, large clear glass windows and galleries from the original church (with original pews in the galleries). Internal features include memorial tablets to the Grahams of Kinross (transferred from the demolished St Peter-le-Poor Church, City of London) and to Colonel Robert Burns-Begg (a descendant of Isobel Burns, youngest sister of Robert Burns) and a stained glass window (by James Ballantine II, 1926).

The kirkyard also dates  from 1832 – older graves are at the site of the original parish church at the side of Loch Leven beyond Kirkgate Park.

A leaflet about the church and its graveyard is available, as is a leaflet on ‘The Old Churches of Kinross: A Walk’, describing a walk round Kinross to visit the Church Centre (see ‘associated buildings’ below)  and the other ‘ancestors’ of the current parish church. These ancestor churches include a number of Secession churches, Kinross being an important centre of the ‘Original Secession’. Both leaflets available from the church and on its website.

Kinross Parish Church also lies on the St.Margaret Pilgrim Route and provides a useful stop on the route, being open to visitors from 10 – 12 Mon – Fri, with a cafe at the Church Centre Mon – Fri 10 – 4. With St. Serf’s Island  (a Celtic and medieaval monastery) and the monument to the Original Secession both within the parish, Kinross Parish Church has a particular story to tell as part of that Pilgrim Route.

Directions: Station Road is the main road into Kinross from the Junction of the A977 and the M90. The church is located on the left hand (north) side of the street before its junction with High Street.

Associated Buildings: Kinross Parish Church also owns the Kinross Church Centre which is the former East Parish Church of 1884 on The High Street. It was built as a United Presbyterian Church and was converted to a suite of halls, meeting rooms, cafe and kitchen in the 1980s. The exterior is largely unaltered and parts of the original internal character remain, especially at the upper gallery level. Access can be arranged by contacting the church office.

Sunday 10.30 am every week, 6.30 pm last Sunday of month. For other services and ‘Time for Prayer’ in the church see website