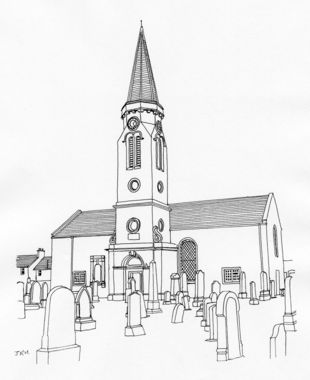 Kingsbarns Parish Church has a long history.  The earliest part of the present church is the lowest stage of the tower which is a relic of the 1631 church.  The church was rebuilt probably mid 18th century, with considerable alterations by John Corstorphine and James Hewit in 1789 and, again by John Corstorphine, in 1797. There was then substantial rebuilding in 1810-11, when the east and west gables were demolished and rebuilt by Robert Balfour, architect, with (once again) John Corstorphine overseeing the work. The top stage of the tower and octagonal slated spire were added by George Rae, 1865-6. The result is a T-plan church with a dominant tower and spire.

The interior of the church is traditional with pews and galleries on three sides facing a central pulpit with sounding board. The communion table and lectern stand on on a dais in front of the pulpit.  The 2-manual, 11-stop organ was moved here in 1964 from Cambo House; it dates from 1882 and was originally made by Foster & Andrews.