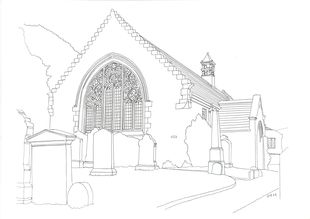 Standing on an ancient Christian site, the current church was built in 1900-02 to designs by W Dunn and R Watson, the successors to James M MacLaren who redeveloped the village for Sir Donald Currie blending Scottish vernacular with the newly fashionable Arts and Crafts style. The belfry of the old 18th-century church is in an enclosure in the churchyard. The Fortingall Yew, close by the church, is believed to be about 5000 years old. The Rev Duncan Macara, minister for 50 years in the 18th Century, is buried beneath the Yew. In his time, Fortingall parish included Rannoch as well as Glenlyon, and was one of the largest parishes in Scotland. An ancient stone font is outside the church, together with interesting cross marked slabs, while inside are fragments of fine Pictish crosses. Recent archaeology has revealed that the Celtic monastery was surrounded by a vallum with a ditch almost 2 metres deep and an correspondingly high embankment. Nearby remains from the neolithic and bronze ages confirm that the dale of Fortingall has always had spiritual significance. On the inside of the church, the walls are sandstone, with oak panelling. The roof is of hand-worked oak timbers in an open barrel-vault. The pews and other furnishings are also of oak, as is the chancel screen, which was designed by Sir Robert Lorimer along with stone tablets of the Lordâ€™s Prayer and Ten Commandments.

Fortingall Parish Church is a Destination Hub on the St Andrew Pilgrim Journey.