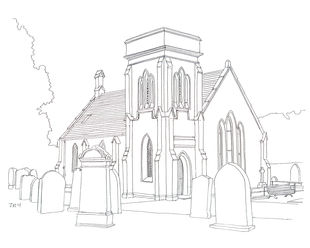 Corsock Church was built as a free church 1851-52 to a design by William McCandlish. It was extended in 1912 by a Gothic stone arch and chancel by J.A McGregor, to a design adapted from the work of James Kennedy Hunter. As you enter the church and look up there is a fine hammerbeam roof. To your right high-up in the southwest corner is a handsome plaster bust of Alexander Murray-Dunlop; it was with his generosity that this church was built. A gifted lawyer and member of parliament, Murray-Dunlop was prominent in shaping the movement that resulted in the ‘Act of Secession’ (the withdrawal of membership of the Free Church from the Church of Scotland in 1843). His family also gifted much of the communion plate and latterly the font. The adjacent stained glass window of the Good Shepherd is in memory of him and his wife. Continuing along the south wall, there is the James Clerk Maxwell memorial plaque and window. The window aptly depicts the three wise men following the star to Bethlehem. The Greek inscription translates as ‘All good things come from above’. As it states in the memorial plaque next to the window; James Clerk Maxwell was the first director of the Cavendish Laboratory in Cambridge. He was undoubtedly the greatest genius Scotland has ever yet produced. The plaque and the window both came from the old parish church which was built in 1839 largely through the generosity, enthusiasm and support of John Clerk Maxwell, the scientist’s father. After 1947 when the churches were joined it was turned into a dwelling house (1951). Such was the strength of feeling at that time between the Free Church and the Church of Scotland, that there was considerable resistance from some members of the Free Kirk session to the enlargement of the window space to incorporate the James Clerk Maxwell memorial window. Some of the session threatened to “throw a hammer through it”, however the Minister, Dr. G.B Burnet (1946-1957) a strong character prevailed. A plaque in memory of John Clerk Maxwell can be seen on the north wall to the right of the entrance. It also came from the Parish Church. Further along the south wall is a modern bright and colourful stained glass. The theme of the window is a reflection of the garden at Walton Park on the surface of the water and embodies the spirit of the river Urr with its cascades and pools. The window commemorates Jan and Percy Brown of Walton Park. 1934-1981. The main chancel stained glass window behind the communion table represents the three Maries at the Tomb and is in memory of Captain Henry Alexander Dunlop who died in 1919. The other windows in the chancel of a beautiful geometric but plain design are in memory of William Barbour of Barlay. They too came from the Parish Church.

Sunday 9.30 KPD 1st Sunday of the month in Corsock