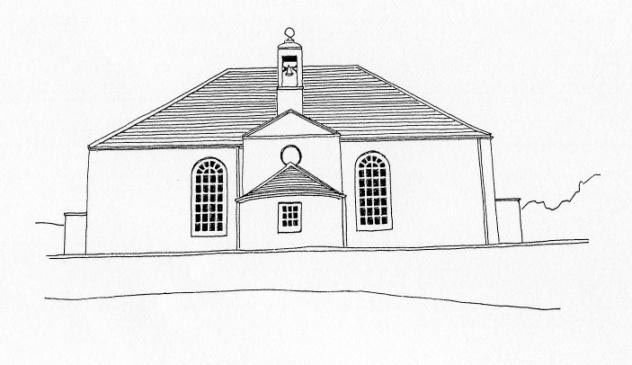 Built in 1802 to the design of architect Michael Carmichael and to an estimate of £441,11s.6d, although an additional £41,15s.2d. was spent on fittings and furnishings. The kirk originally had galleries at both ends, accessed by extramural staircases, and was planned to serve a congregation of up to 400 persons. Michael Carmichael was employed on certain works at Inveraray and his design for Colonsay may perhaps have been influenced by the earlier design of Killean Church, Kintyre, by Thomas Cairns. Features include a modest ‘birdcage’ belfry which crowns a classical pediment above the semi-circular vestry, the pediment being enhanced by a ‘blind’ oculus. Four round-headed Georgian windows make for a well-lit interior which is graced by an attractive combed wooden ceiling. Artefacts include vernacular wooden offering ladles, an elegant pewter baptismal font supported by a brass crane, a sidesman’s chair made from flotsam and (beside the porch) a mediaeval stoup from the former chapel at Kilchattan. The present church is close to a Bronze Age burial site and replaces an earlier chapel indicated on Blaue’s map (c. 1615). The neighbouring former Parochial School is mentioned in John Bucan’s ‘Island of Sheep’. Colonsay & Oransay did not become an independent ‘Quod omnia’ parish until 1861 and until then was part of the Parish of Jura. The minister from May 1796 was Donald McNicol and he inherited the extant assistant in Colonsay, Patrick McRuer, of whom he did not approve. The ensuing acrimony was unhelpful in a community about which, as recently as 1766, Pennant had remarked: “Colonsay and Oronsay might be supposed to have been isles of sanctity, yet from the Reformation till within the last six years, the Sacrament has been only once administered.” The unsatisfactory consequences of the link with Jura were reflected in a visitor’s comments upon the state of the church in 1857: “When built, perhaps sixty years back, it was rather a respectable place of worship for that time. It is now dingy and desolate-looking. Its largest windows are decaying, and have been injured also by the storms. They are now clumsily shut up by pieces of undressed wooden boards. The ground around the church is unenclosed. In this state, the building is found by cattle to be particularly convenient – “in cold a shelter, and in heat a shade.” Colonsay’s first resident Parish Minister (1861 – 1872) was James MacKenzie, born in St. Kilda; a later incumbent (1917 – 1925) was Kenneth MacLeod, who wrote ‘The Road To The Isles’in the upper back study of the former manse. The church is always open. There may be Sundays in winter without a service, please check the church website for details

Sunday: 11.30am (There may be Sundays in winter without a service, please check the church website for details) 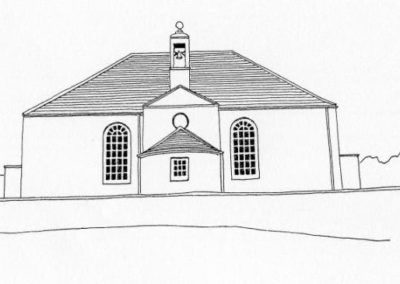