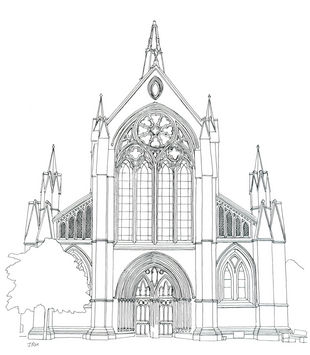 Glasgow was founded by St Ninian in the 5th century and visited by St Kentigern (also known as St Mungo) in the 6th century when a religious community was established, probably on this spot. St Mungo’s tomb is in the crypt. Dedicated in 1136, the Cathedral Church of St Mungo is the largest and most complete of Scotland’s medieval cathedrals still in use. Much of the fabric is 13th century and the grandeur has survived centuries of rebuilding and restoration. The stone screen is medieval, the woodwork is 20th century. Outstanding collection of 20th-century glass by Francis Spear, Herbert Hendrie, Robert Armitage and Sadie McLellan, William Wilson, Gordon Webster, Harry Stammes and John K Clark. Modern tapestry. Organ by Willis 1879, rebuilt by Harrison & Harrison 1996.

Glasgow Cathedral is a Destination Hub on the St Mungo Pilgrim Journey.