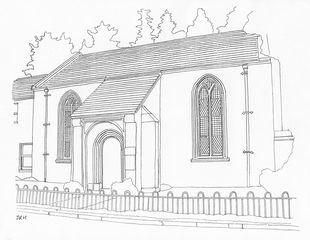 Built 1810-11 as a Roman Catholic chapel by Clanranald of Arisaig and designed by James Gillespie Graham. A simple rectangular building with the entrance porch between two windows on the south elevation. Built of the local stone with grey painted margins; the wooden Y-tracery of the windows is painted red. Simple interior recast and re-orientated to west when the building became Church of Scotland in the mid 1930s. Pulpit, communion table and lectern given in memory of Sir Arthur and Lady (Gertrude) Nicholson (d. 1932 and 1920) of Arisaig House. Mural tablets to their sons killed 1914 and 1915. Bellcote erected by Miss C C Astley (Lady Nicholson’s sister) of Faire-na-Sgurr. United with Mallaig St Columba’s in March 2008.

The church is normally open