The Window Detective – The early days.

At an early stage in my retirement hobby of photographing Church interiors and stained glass windows, I was introduced to Graham, the grandson of James Benson

– a Victorian/Edwardian stained glass window designer and fabricator with studios and workshops in Glasgow from 1895 through the late 1920s. Graham was tracing his family genealogy and had discovered an advertisement in an old Glasgow trades register for 1914-15 that listed the location of over 18 stained glass windows by his grandfather. These locations were scattered all over Scotland and so the great Benson window hunt began. 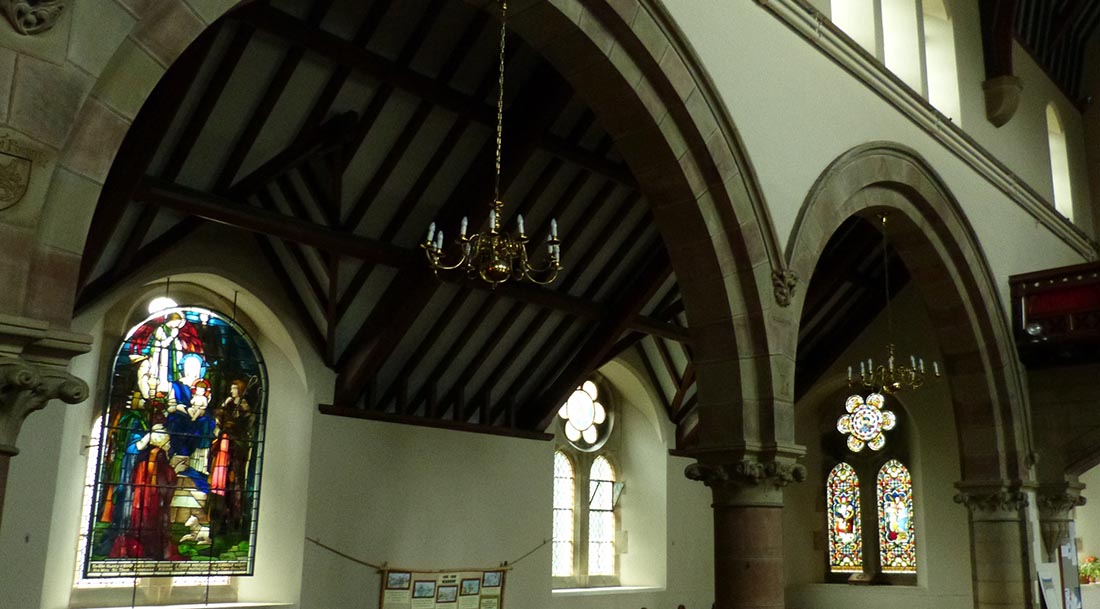 Locations in the advert such as – the Parish church, Hawick – were very vague, as I soon found that there were 6 parish churches in Hawick at that time, whilst others stated the name of the church. Two windows listed were quite local to me these being – St. Aidan’s Melrose, and Black Friars, Jedburgh, which made the task of tracking down the windows much simpler, or so I thought at the time.
I soon discovered by checking records in the local Heritage Hub that the Hawick parish church with the Benson window had been demolished and that the window had been saved and crated up by the district council, but subsequently destroyed when their storage area was flooded several years later when the River Teviot burst its banks. Unfortunately, no photographic records were made at the time the window was salvaged.

“I also found that St. Aidan’s had closed down when the congregation merged with that of Melrose Old Parish Church”

I also found that St. Aidan’s had closed down when the congregation merged with that of Melrose Old Parish Church after which St. Aidan’s fell into disrepair and was demolished in the 1990s to make way for private houses. I had found an old Black and white photo of the St. Aidan’s window, which was a memorial to Mrs Anne Ross Cousins,( 1824-1906) the wife of the Minister there and a renowned writer of Hymns, including – King Eternal, King Immortal. However, everyone I consulted was of the opinion that the window was destroyed along with the church building.
Imagine my surprise and delight therefore when quite by chance on a visit to Melrose Old Parish Church to photograph the interior and their superb Christopher W. Whall stained glass window for SCT’s archives, I found, hidden away behind a pile of old hymn books in the Vestry, a small section of the St Aidan’s window with the James Benson maker’s mark clearly visible. No one connected to the church is able to explain how that section of the window was salvaged and placed in the vestry wall. 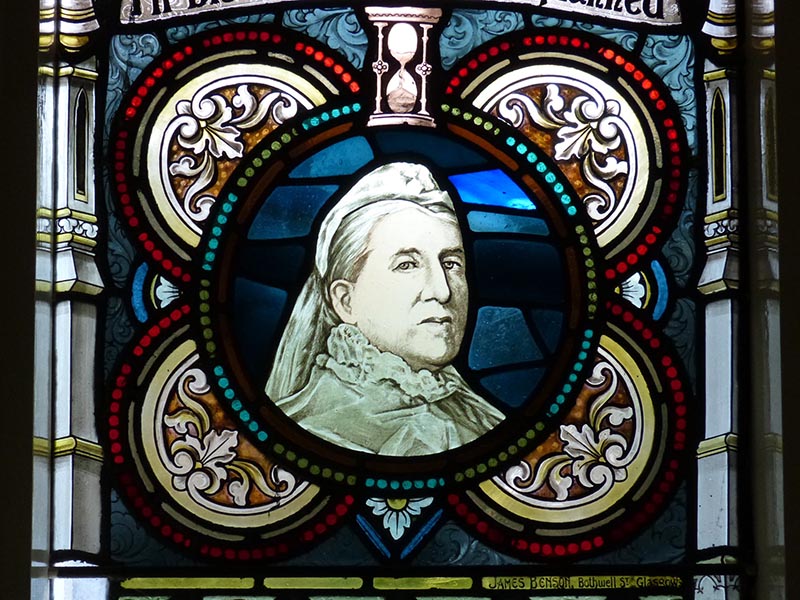 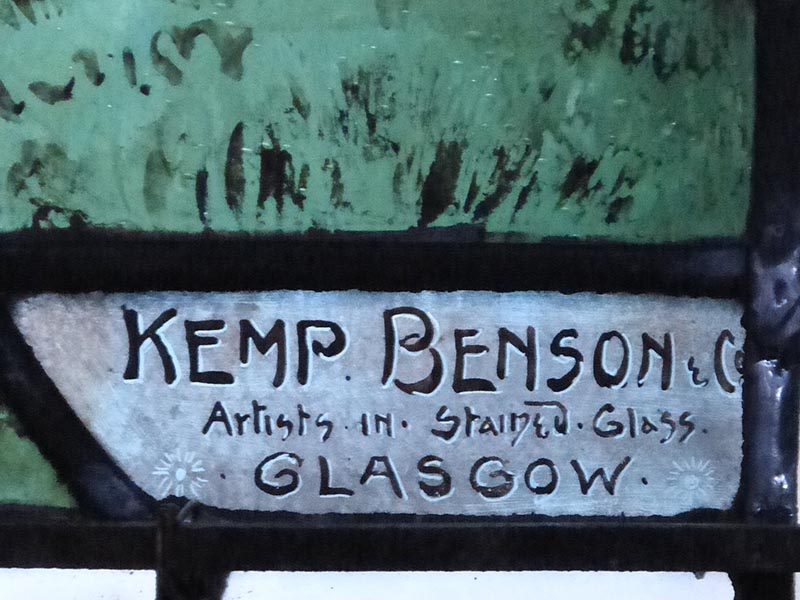 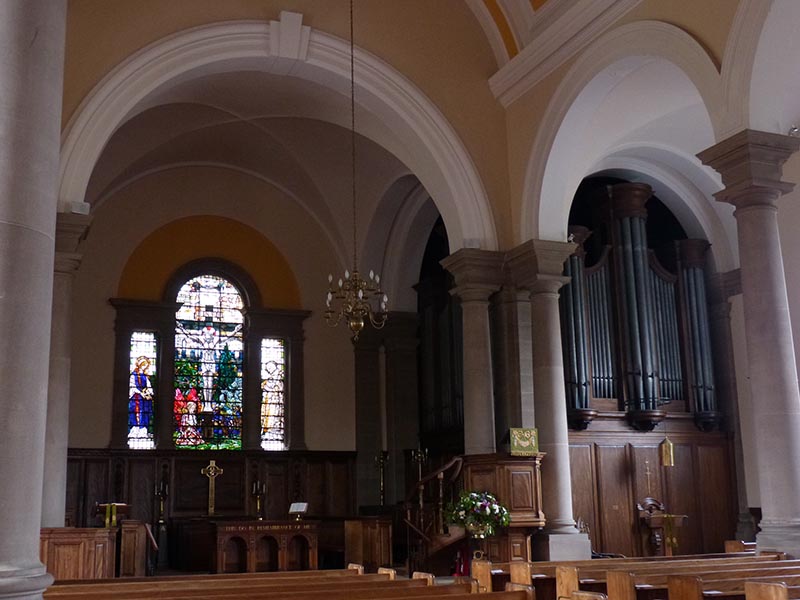 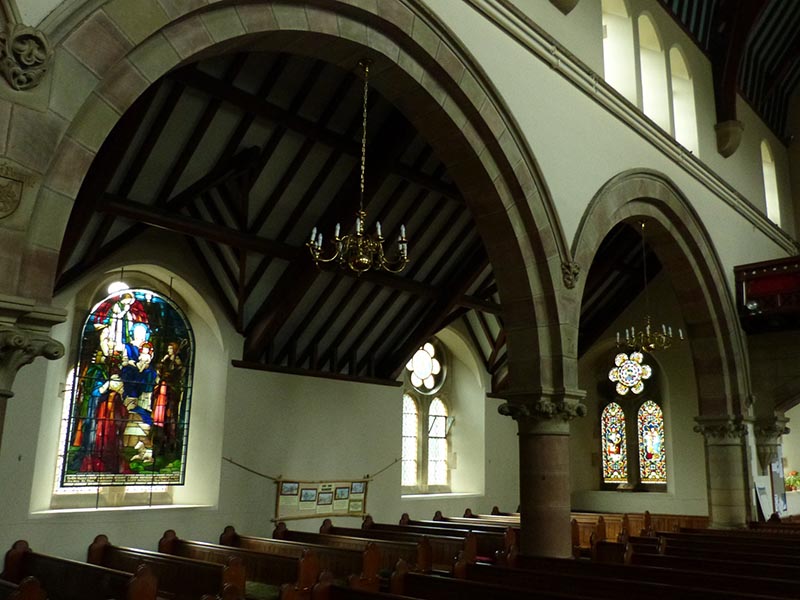 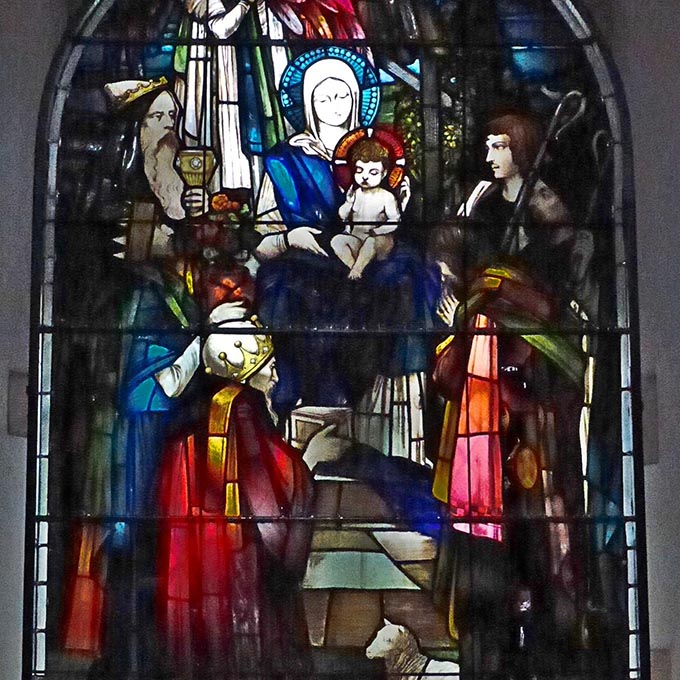 Turning my attention to Black Friars – Jedburgh, I found that this was re-named Trinity church but closed when the congregation was merged with that of the Old Parish Church in Jedburgh. However, I found that the building was still intact and in use as a storage warehouse. Further research resulted in turning up an old newspaper article describing the raising of £10,000 by the Trinity congregation to remove the window and transfer it to the Old Parish church, which was re-named Old & Trinity, where I was subsequently able to photograph it in all its splendour.

Mr Douglas Hogg, a locally based stained glass artist, was retained by the congregation to remove and re-install the window from its original site to its new location in a steel frame mounted on the south wall of the nave in front of a plain leaded glass window
The window which depicts the Nativity, is a memorial to the Matheson family dated 1902 and was commissioned by their grandson living at that time in New York. The window was designed by the renowned independent artist Alex Walker but fabricated in the workshop of James Benson, whose maker’s mark is clearly visible.

These early investigations gave added depth to my photographic hobby and led me to being dubbed – the window detective – as a result of subsequent efforts to trace more Benson windows and the names of long dead artists that created many of the beautiful stained glass windows that illuminate our historic churches and kirks. 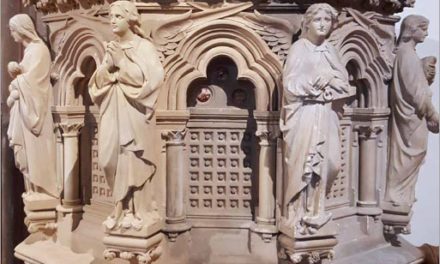 Have Bus Pass, Will Travel! 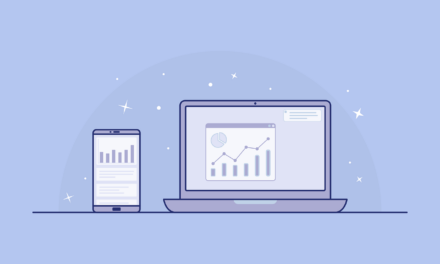 Have Bus Pass, will Travel!